How to Simulate a Ponytail

If you're writing your own rigid body physics simulator, after you've got the bodies bouncing around as independent 6 degrees of freedom (DOF) objects, and interacting with springs, damping, gravity, and other external forces, and you've added single-point collisions between the bodies and the world, what's next?

Two useful next steps are to add support for resting contact so the bodies can stack, and to add hard constraints so you can build more interesting compound jointed mechanisms, like ragdolls and cars and whatnot. Resting contact is in some ways a superset of hard constraints, and it's certainly more difficult to do right, so a good next step in learning is to implement constraints.

There are a lot of ways to implement hard constraints, and they vary in performance, stability, accuracy, and difficulty of programming. They each have pros and cons. Some of the more popular methods include:

I've implemented all of these and a few others to boot (see Five Physics Simulators for Articulated Bodies for discussion of the first three as well), and I hope to eventually have articles about all of them, and discuss the tradeoffs and pros and cons.

The first technique I implemented when I was investigating constrained dynamics were "Augmented Coordinates with Lagrange Multipliers". It sounds complicated, but at its heart it simply means you calculate all the known external forces on your objects from things like gravity, springs, explosions, and whatnot, and then you compute the forces necessary to add into those external forces to keep the constraints satisfied. So, if you have an object constrained to slide on the floor, and you're not pulling on it, the constraint forces computed might be 0, or they might be just enough to counteract gravity if you're simulating it. If you pull up, the constraints pull down to cancel out your pull. If you slide the block sideways, the constraint forces do not try to stop you, and the block slides, but can't move up and down.

In that example, we were probably using a 3DOF constraint, one translational DOF to prevent the block from leaving the floor, and 2 rotational DOFs to prevent the block from rotating except about the normal to the floor (so it doesn't rotate into the floor). One great feature of Lagrange Multiplier constraints is that they explicitly subtract off the DOFs one at a time, and you can control them in a very modular way. So, you can easily have the same code handle constraining any combination of the 6 DOFs of a rigid body. Once you get your simulator working (or if you play with my sample code below) you can see this modularity in action.

The math for Lagrange Multiplier constraints is very clean and elegant, and it can be expressed at a high level very parsimoniously. Here is the full general derivation of the technique for arbitrary DOF constraints. Obviously, the lecture and articles below go through this math at a much lower level and with more details, and they don't actually lift up to this level of generality due to space and time constraints, but all the detailed nitty gritty math in the lecture and articles is subsumed by this math in its most general form. It is worth noting the sample code actually does directly implement this general math, however.

I decided to extend my rigid body articles to discuss simulating a ponytail with hard constraints back in 1999 at the Game Developers Conference Roadshow in Seattle, then I wrote a two-part article about it for Game Developer Magazine and gave the lecture at the 2000 GDC. 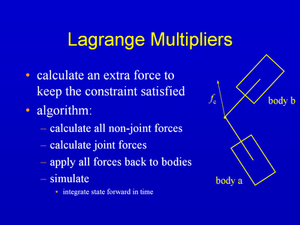 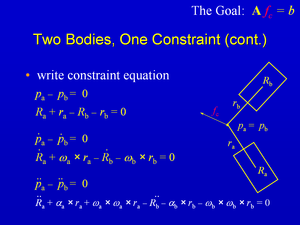