As I've mentioned elsewhere, I've implemented a bunch of different physics and inverse kinematics algorithms for games. At the 2003 Game Developers Conference, I gave a talk about 4 of the articulated rigid body simulators I prototyped for my rock climbing game, and then prognosticated about an imaginary 5th simulator that I thought would be a good direction to research for game physics.

I explored two axes of the space of possible simulators, the type of integrator, whether explicit or implicit, and the type of coordinates, whether augmented or generalized:

The talk was titled Five Simulators for a Human Body, which was a slight misnomer, since they were really just for simulating articulated rigid bodies with stiff forces. I think the talk was not very dynamic for the attendees, but it's got a ton of subtle information about the techniques in it. I'm not sure how much of the subtlety requires you to know the material already to understand, however. This was definitely one of my "original recipe" style talks, lots of yellow text on blue backgrounds, and few pictures.

That said, in addition to the descriptions of the techniques, it's got two very important sections, one on degrees of freedom (DOF), and the other on stiffness, its importance for games, and how hard it is to solve stiff equations. 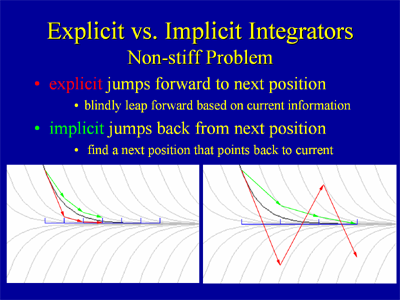 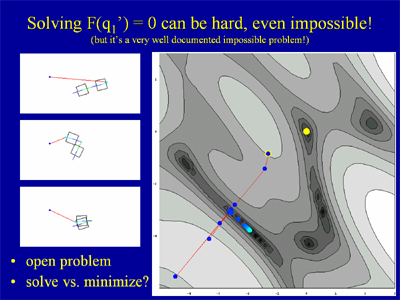