"Doing AI without making games is like writing graphics code but never rendering an image."

I gave a lecture at the 2010 AI and Interactive Digital Entertainment Conference titled SpyParty, A Game About AI...plus some ranting.

While I talk about the challenges of SpyParty a bit at the beginning as a framework for talking about AI in games, the core of the talk is this statement: Game AI is Game Gesign. So, it follows that researchers need to actually make compelling games to really do successful AI research. This is a somewhat controversial statement, made more so by me telling the audience of AI researchers that their work so far has not been very relevant to games. Then I try to explain why, and how to fix it.

The middle of the talk is about various technological challenges I've faced making Spore and SpyParty. I talk about:

Then I talk about the two biggest open problems in game AI and animation:

Finally, I claim these two problems are really a single underlying challenge for game development, namely:

Sadly, computers and computer languages suck at dealing with things that happen over time. No, I don't think you should go make a new language to "solve" this problem. I think we don't have the conceptual framework for how to solve the problem yet, so you'd just be wasting your time until we figure that out.

"AI programming is game design. The lack of recognition of this fact, and the failure to embrace it, explains why the AI Research community has had almost no impact on the game industry at large."

The last third of the talk goes into why I think AI researchers need to make games, and I don't mean little throwaway games that only their grad students play, I mean games that are put up for download, and are playtested, and are compelling.

I make this claim based on a chain of reasoning that starts with the idea that the behavior of the AI, and its tuning, is game design. Then I mix in some Frank Lantz and his ironclad proof that "games are the aesthetics of interactive systems", the idea that "aesthetics are the opposite of science", and then I hook it all together, to the audience's dismay. 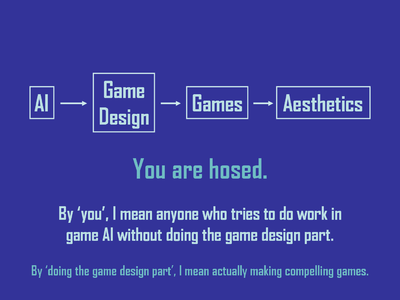 In this section, I also talk about...

Here are the synced slides. The first few slides are the same as Design, Games, & Game Design (feat. SpyParty), and the talking over those slides is similar but slightly different, so if you want every nugget in the talk you should listen, if not, skip to slide 6 (12:40 in the talk):

This talk is a sibling to a few of my more general talks: