Elvis Has Left The Building

I just got laid off from Maxis! 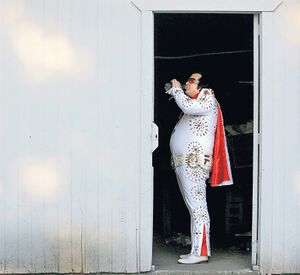 I can't say that it was a shock, but it was still somewhat surprising. It's funny, you occasionally hear about people who were laid off, and from the safety of your job you can't help but think, "Even though it's not supposed to be merit based, that's gotta be in the mix; they wouldn't actually let the good people go." Then it happens to you, and you're like, "Hey, wait a second..."  :)

I had a truly great time working on Spore. I was lucky to get to contribute to some really amazing stuff over the past six years. In the past few months, I chose to work on smaller things that generated lots of goodwill but no revenue, which tends to be a problem when you're expensive and the economy is down! Still, we got asymmetry into a patch, which has enabled some really incredibly insane creatures and vehicles. Next I was going to do some research on improving searching and browsing assets in the incredible resource that is the Sporepedia. I think there are some amazing opportunities to mine the user created assets if the browsing and tagging facilities can be improved. Will and I used to debate the best way to classify the assets, and hopefully we'll see some neat stuff going forward there.

I also got to work with some excellent game developers, many of whom have become my good friends. I hope the others who got laid off (there were 24 in all, I think) will land on their feet and do great work, and I hope the folks who are left will try to carry the Maxis torch and keep making games that are different and expand the boundaries of our art form.

As for me and my future, if you attended the always-interesting Experimental Gameplay Workshop this year at the Game Developers Conference, you may have seen the indie game I've been working on in my spare time. I believe the idea is quite strong, so I was thinking about quitting to work on it more seriously in January. Now I guess the choice has been made for me, so assuming I can get the financial numbers to add up, I will start cranking on it.

The game is called SpyParty, and I've quickly set up a website at http://spyparty.com.

The game is quite different from anything out there, and it tries to really capture the subtlety, tension, and drama of espionage, as opposed to the industry's usual blow-stuff-up take on spy games. I hope you'll subscribe to the RSS feed if you're interested in getting updates about my progress. The site already has links to some of the press coverage of the demo, and I hope to update it regularly with news on the development. I also have some wacky ideas about how the player community can contribute to the game's development as well, which sounds really scary when you type it out like that!

I think it's an incredible time for indie games, with "AAA indie games" like Braid, Castle Crashers, World of Goo, and many others lighting the way towards complete creative control and artistic independence for small, innovative, and highly polished games. It's exciting and scary and it's a very long road, but it seems like it might be the way for me!