Do Your Job Well, Please

This is my rant from the 2009 Game Developers Conference rant session, Burned by Friendly Fire: Game Critics Rant. The theme for the rant session this year was game journalism, and most of the ranters were journalists or ex-journalists. I was a "surprise" guest ranter, as usual. My rant is titled Do Your Job Well, Please and was a plea from developers to journalists. It's about how important journalism is, even game journalism, because it impacts people both personally and professionally. With this great power to impact people comes great responsibility to get the facts right, to provide context, and to convey the subtlety of the situation being reported. This too-often does not happen, and it is not pleasant to be on the receiving end of sloppy reporting.

I usually wait until I have the audio from the show to put up, but someone was nice enough to videotape the whole thing and put it on YouTube. The audio is not great, but it's more than good enough, and the video is in focus only on the back of someone's head, but it's still nice to have this so quickly, so here you go:

The video cuts off right as Kiss Off by the Violent Femmes comes in, which is slightly unfortunate[1], and it doesn't show the final example, an incredibly awesome screenshot from an article about Warren Spector, so I'll put that here: 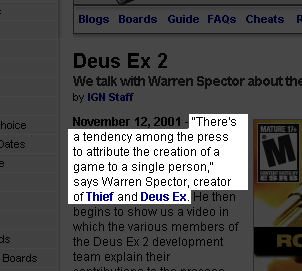 "There's a tendency among the press to attribute the creation of a game to a single person," says Warren Spector, creator of Thief and Deus Ex.

Here is the presentation ppt and accompanying music snippet in a zip file. The articles referenced in the rant are available here and here.

Also, as shown at the beginning of my rant, we awarded the coveted Duct Tape Award to Clint Hocking this year for his excellent rant in 2008.

There's been some good coverage of my rant, which is nice, given the topic, including:

Most of the controversy this year came from Heather Chaplin's rant, which you can read about in the above links and all over the net. Will she be the Duct Tape Award winner next year? Place your bets now.