Power fantasy is the thing we do best in games. We excel at giving players a feeling of power over their surroundings, at letting them feel the satisfaction of starting out weak and becoming invincible[1], until they are the kings of the world, the rulers the universe, they have vanquished evil, saved the girl, and finally gotten to that really high ledge by exploding a rocket at their feet.

However, I think power fantasy is pretty cheap, and we need to eschew it[2] and find better, deeper, more meaningful ways to entertain and compel players.

The New Yorker[3] had a David Denby review of the film, Seabiscuit. As usual, Denby writes a pretty good review. But one sentence stuck with me:

When a director exploits our hard-wired responses to pathos, he fails, so to speak, a test of honor.

I think he's totally right about pathos, and it's also exactly how I feel about power fantasy in games. Every time we use it, we fail a test of honor and miss a chance to explore new emotional territory. 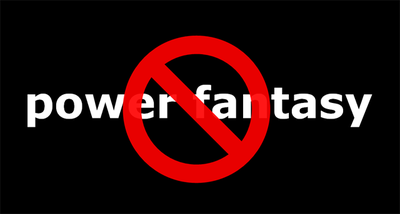