Difference between revisions of "Dinosaurs"

I don't usually post much personal stuff here, but I have been meaning to post more artwork, and this falls into that category—kind of, sort of—so here goes.

Last night I had dinner to catch up with my friend Kyle Gabler down in San Jose. We ate at The Grill at the Fairmont Hotel in San Jose, which is where the Game Developers Conference used to be. The restaurant is one of those dark places filled with high-backed booths in which old white guys do deals. The food is merely okay, except for one thing: the chicken pot pie is out of this world. It's giant, baked in a puff pastry, and it completely rocks my world. Since the GDC moved to San Francisco I have to come up with excuses to go to San Jose a couple times a year. I think this pie is better than the one at Bake Sale Betty, which itself is quite good and gets rave reviews in the Bay Area. I've heard there's some secret chicken pot pie place in Hayward that I need to find.

This article, however, is about dinosaurs, and specifically, the dinosaurs that Kyle and my daughter Clementine drew while we were waiting for the food. 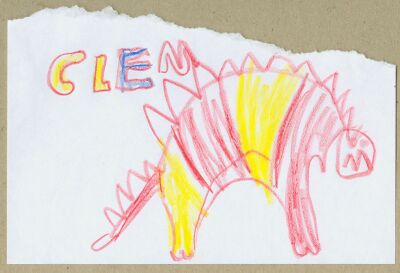 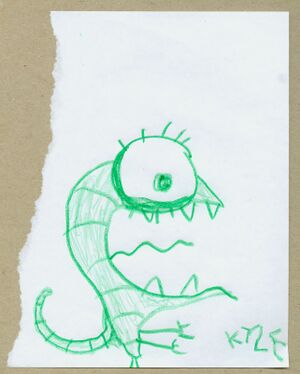 Kyle wanted them to fight, but both artists accidentally drew their subject facing the same direction, so I guess one is chasing the other.