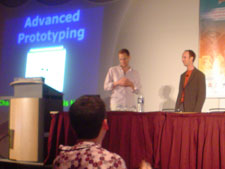 One of the goals for Chaim Gingold's and my 2006 GDC lecture was to try learn how to do really a good two-person talk. I'd seen a bunch of mediocre two-person talks at the GDC over the years—talks that would have been better if they were given by either one of the speakers as a solo talk—and I was curious to know what it would take to make a truly good two-person lecture, a talk that was better than either person could give alone.

I think we accomplished this goal. The lecture was the highest rated lecture in the Game Design track that year, and a lot of the feedback form comments mentioned how the natural back-and-forth we achieved on stage helped communicate the material and was fun to listen to, as a bonus.

You should probably listen to the talk if you want to judge how we did for yourself.

We took some loose notes as a sort of postmortem on what we learned. Here they are: 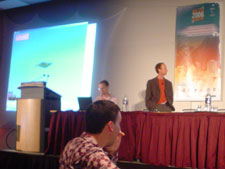 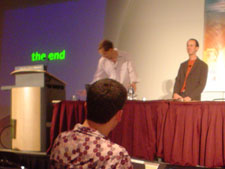