I just returned from speaking about User Generated Content at the gamehotel conference in Zürich. I'll put the slides up as soon as they send me the audio.

This page is not about the talk or the conference or the city, however. It exists simply to extol the virtues of the direct United Airlines flight 0901 from Frankfurt airport (FRA) to San Francisco airport (SFO), leaving at 1pm Frankfurt time, and arriving at 4:30pm San Francisco time. This flight rocks, not because I am particularly fond of United Airlines—they just happen to be where all my frequent flyer miles live—or of the 747-400 that flies it—it's an old plane with no modern features like laptop power supplies or in-seat screens in economy.

The reason this flight rocks is that it leaves in daylight, and chases the sun around the planet, which means the entire flight is in daylight, which means when you fly over the east coast of Greenland, you get the most incredible views of the snow and cliffs and icebergs. You get a full 20 minutes of some of the most amazing vistas I've ever seen out an airplane window[1]. My mind almost can't integrate what it's seeing...the plane is at around 35,000 feet, so you're 7 miles away from these structures, and they're still enormous and fill the field of view and are so finely detailed they look crenellated, even at this distance.

Here are a couple crappy cell phone pictures that don't convey even 5% of the awe inspiring wonder of seeing it live: 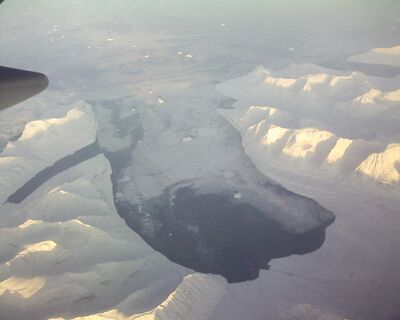 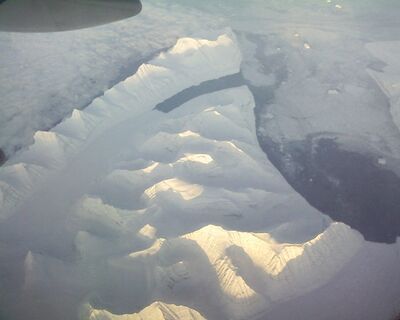 If you're flying back from Europe to the west coast, take this or a similar flight, and make sure you watch the map and figure out when you're going to fly over Greenland. It's important to catch the east-coast flyover, since all the times I've done it the west coast is covered with clouds. Also, you have to catch the small time window when you get close to the coast, because after you're inland it's just a giant flat shaded white polygon for hours. You can't even tell when the snow stops and the clouds start.