I waded into the debate on game achievements with my lecture at the 2010 Game Developers Conference titled Achievements Considered Harmful?, with a strong emphasis on the "?". Since the game industry seems to be careening head first into a future of larding points and medals and cute titles on players for just starting up a video game, I wanted to raise awareness of the large body of research studying the impact on motivation from various types of rewards. Trying to be "fair and balanced", I delved into what the data show and what they don't show. 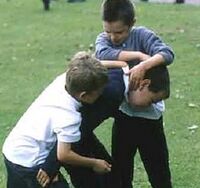 Sadly, there is a contentious debate amongst psychologists about how rewards affect motivation, and I spend a bunch of time in the talk discussing this debate. Psychology is at the soft end of science, to put it mildly, and so it's easy for people—including academics—to have an agenda or opinion and "interpret" the data in a way that backs up that agenda or opinion. This is human nature, of course, and confirmation bias is everywhere in life, but reading some of the papers reminds me more of a schoolyard yelling contest than of peer reviewed research.

To hack my way out of the thicket, I focused on the two results that both sides seem to begrudgingly agree are true.

I define all these terms in the slides below, and I'll fill out this page more as time goes on.

The first is the scary one, since it seems to have a lot in common with the ways games reward players with achievements and the like. I reiterated many times that there are no studies that I'm aware of on achievements for games, but if they really could be sapping intrinsic motivation to play games—and I can't see how you can argue with the possibility this is true after looking at the mountain of available data—then I think somebody should start funding research into this. I think Microsoft Research would be the perfect people to do this work, since they have both Xbox Live (meaning a great source of data, and a vested interest in figuring out the truth for the longevity of the platform) and a bunch of smart psychologists on staff. Hopefully they'll heed my call.

Why are you making games?

If you’re intentionally making dull games with variable ratio extrinsic motivators to separate people from their money, you have my pity.

If you’re making intrinsically interesting games and want to make them even better, be very careful with extrinsic motivators.

Towards the end of the talk, I outline a potential Nightmare Scenario based on all the implications of the research going the wrong way for games:

Who knows whether things will actually go this way, but it seems clear to me that the potential is there, and so we should look into this more instead of blindly moving forward.

In the talk I also address a bunch of the Common Buts:

I go through each of these in turn, trying to address the core of the point.

Finally, I talk a bit about how to Minimize the Damage, if you're forced to have achievements and rewards in your games. As you may know, I'm working on an indie spy game called SpyParty, and since some platform holders currently require you to give away achievements to pass certification, I gathered a list of ways of implementing rewards so they do less harm:

Again, the data shows even following this advice reduces intrinsic motivation, but it's at least something you can do. I talk about this in more detail in the slides below.

I had a section here about the trend I have started calling metrics fetishism, but it was long enough that I moved it to its own page.

I usually just dump a ppt and mp3 up here, but I decided I'd try something fancier this time. After searching far and wide for a good tool for putting presentations online, I found MyPlick, which is a silly name, and the site is unquestionably ugly, but the tools for syncing your slides to audio are really great compared to all the others[1], and their player is simple and efficient and not bogged down with menus and whatnot.

If you're on a phone that won't play Flash, or want to listen to my dulcet tones on your Walkman/iPod/whatever-the-kids-are-using-these-days, or you just want to study my poorly constructed PowerPoint deck, here you go:

Here's where I put miscellaneous notes and links, both to articles talking about this lecture, and related stuff: